The Black Lives Matter movement has been at the forefront of most people’s minds, in the last few days, but it is not something that sprung up after the death of George Floyd and Breonna Taylor. It began in July of 2013, as a hashtag that we are now all familiar with #BlackLivesMatter. Born from the pain of the black community, after the acquittal of George Zimmerman, in the murder of Trayvon Martin, it grew from a hashtag, to a movement, organising protests, donation drives and awareness campaigns, to bring attention to the high levels of police brutality faced by black people in the USA.

The movement has travelled overseas, with rallies across the world, and Black Lives Matter groups forming in countries across the globe, including here, in the UK, where Black Lives Matter activists have protested deportation flights, police brutality in the UK, climate change and it’s effects on people of colour, and they have protested, most recently, to show solidarity with US protesters, as well as raising awareness of the lack of justice over the death of railway worker Belly Mujinga, who died of Covid-19, after a passenger spat at her. Yes, contrary to popular belief, racism didn’t just arrive in the UK recently, it also didn’t suddenly appear after the brexit referendum, or during the EDL marches, or after Grenfell Tower, or when Mark Duggan was murdered, and we had our own riots, it hadn’t just arrived when Stephen Lawrence was murdered, and the police dragged their heels to actually bring his killers to justice, or when Enoch Powell was bleating about rivers of blood. It has always been here, just like it has always been everywhere. The UK is built on racism, most of it’s residents just ignored it, until they couldn’t.

The reason I’m explaining this, is because Black Lives Matter is in the spotlight right now, due to the protests against the murders of George Floyd and Breonna Taylor by police officers, as it should be, being one of the most prominent civil rights movements in recent years, but what I really want to talk about, is allyship, and why so many alleged allies, are undermining the work of movements such as Black Lives Matter, in the recent climate.

I understand that people want to help. I applaud them, even. It is heart warming to see more and more people lending their voices to the fight for equality, but it is possible, even with good intentions, to do more harm than good, and in some cases, I don’t even think the good intentions are there. Activism is treated as a trend, more and more, as time goes by. The recent cries of “Be Kind” after the death of Caroline Flack, were very quickly followed by a return to social media bullying and a lack of regard for mental health, with lots of the “Be Kind” bandwagon jumping head first into attacking others, as soon as they forgot that they were totally against bullying. It is now June, and it’s pride month, so we are seeing lots of posts and trending topics, showing solidarity for the LGBT+ community but quite a few users posting rainbow flags and pictures of Marsha P Johnson, will be the same people who shout “Let kids be kids!” at the thought of LGBT inclusive education, or will tell LGBT+ activists that we are “Taking things too far!”. Of course, there are lots of people who genuinely mean it and want to see a better world, but there are also lots of people who are just posting for attention, likes, and to conform to social expectations, before they return to ignoring injustice, when it is no longer popular to care about it.

Firstly, I think we should talk about social media. Social media is an invaluable tool for civil rights activism these days. It is a quick and easy way for anyone to get involved, spread awareness, and also to hold abusers of power and oppressors to account, as we have seen, countless times in recent years. If you have resources available to activists, and want to share it so that they know, you can, easily, with a few clicks. If you have information about avoiding dangerous areas during protests, you can get it out there instantly, and it will find it’s way to people who need it. If there are cases of oppression that aren’t getting as much attention, they can be amplified on social media, as can donation drives, bail funds and important resources for activists, across the world.

However, this is diminished, by people spamming the key hashtags, with meaningless platitudes, to make them feel better. I’m sorry if this sounds harsh, but despite various activists pleading with people not to, well meaning (or narcissistic) people are flooding the #blacklivesmatter tag with blank posts, to show solidarity, in a social media blackout, or spamming the tag, with humble brags about how they don’t care that they’re losing followers for posting about racism (they obviously care, otherwise the post wouldn’t exist…), which makes it difficult for posts with useful information, resources, and calls to action to actually be visible, in the hashtag. Many black activists have argued that the #BlackoutTuesday social media campaign hasn’t helped raise awareness at all, and has only really succeeded in making some allies feel better about themselves, which, at a time like this, shouldn’t be a priority. If people are telling you that your actions are unhelpful, accept that, learn from it, and don’t spend several posts playing the victim. 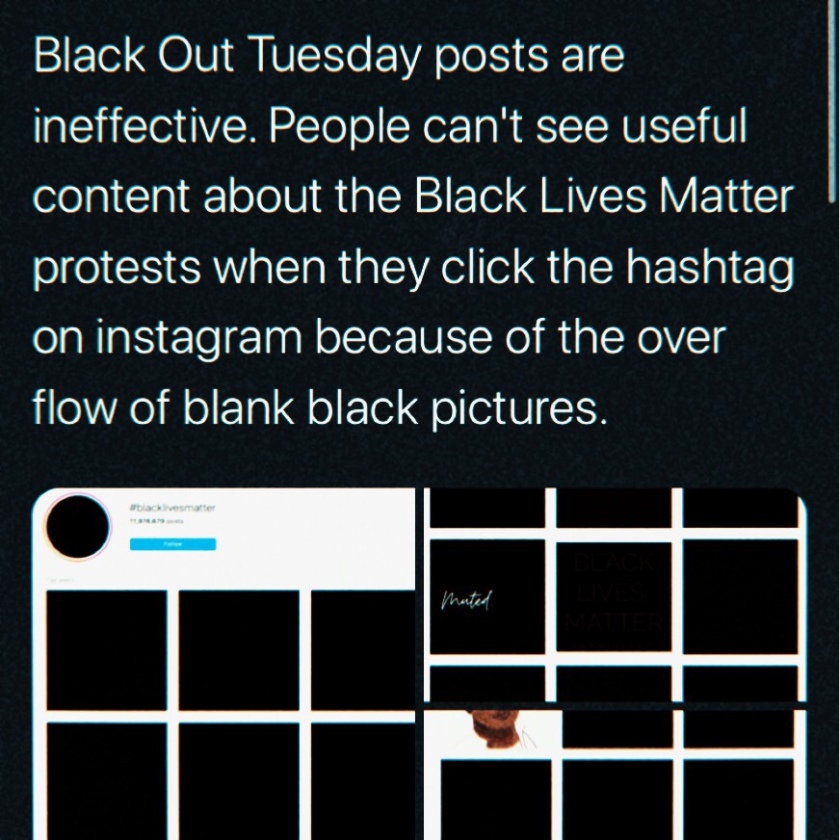 Some people are genuinely posting in solidarity, and are trying to show allyship with black people during this time, and often, these are the people who will take posts down, to make space for resources, but some are quite clearly posting, on overdrive, to make sure that everybody knows what a good person they are, but in doing so, they are depriving activists on the ground of vital information, and depriving people who can’t protest, with information on other ways to help, and they are very defensive when called out. I experienced this for myself, actually. I posted about it on my instagram story, and a white childhood friend obviously took it personally, and decided to send me a snotty DM about it, asking what I had personally done for racism. I politely reminded her that as a biracial person, who has faced racism since childhood, and spoken against it for as long as I could talk, her anger was perhaps misdirected, but the reality is, she was angry, because, though I didn’t mention her by name, and in fact named nobody in my post, she clearly saw herself in what I said and decided to get overly defensive, instead of assessing what more she could do, outside of performative social media posting, that harmed more than it actually helped. Perhaps, this is how I use my privilege. As a biracial person, I am not only half black, but also half white, so I suppose, I can bridge the gap, and gently explain to angry white people that sometimes, things are bigger than you, and your hurt pride.

It shouldn’t be the case that minorities are having to plead with so called allies to stop hijacking hashtags that contain resources for action, to brag about their newfound moral high ground, but we are where we are, and it calls into question how much these “allies” really care about the cause, when they are berating people who have faced racism, after being called out for making racism they have never experienced, about themselves and in some cases, putting the black lives, that they claim to care about, in further danger, so that they can pretend they’re in The Purge. There are allies who are using their platforms to amplify information, support activists and generally, just be good allies, but that doesn’t mean that we can’t and shouldn’t call out people who are not following these good examples.

This leads me to the protests themselves. There have been videos and photos showing real allyship, with allies using their privilege, to protect other protesters, and using their voices to amplify calls for action. That is exactly what allies should be doing at protests. A protest is not a fun day out. It is not a photo op for social media. It is not an aesthetic. It is a genuine attempt to change society, and so an ally who attends should be prioritising the cause and the message, as well as keeping themselves and others around them safe. Sadly, this has not always been the case in the recent wave of protests, with some alleged allies speaking over black activists, alleged allies damaging property, handing out projectiles and basically treating it as a fun little anarchist fantasy, despite black people at the protests begging them to stop.

There have been multiple videos of black people having to plead with “allies” who are tagging buildings, grabbing bricks and seriously endangering the lives of peaceful black protesters around them, because realistically, black people will be blamed for those actions, regardless of how peacefully they were protesting, and it has been obvious, for a very long time, that when it comes to black lives, they do not matter to the police. Any ally who actually cared about the cause would know that, and act accordingly, to keep everyone at the protest safe, and ensure the message of the protest isn’t lost, but there are too many cases where this isn’t happening. There are “allies” who have instigated violence, there are “allies” turned up with cringe, and frankly, racist signs, about their preference for sex with black men, ironically captioned with #FuckRacism, as if racial fetishisation isn’t racism, and hasn’t lead to centuries of sexual abuse and harassment for minorities. There are “allies” who are spending time taking photos and videos that look aesthetically pleasing, rather than focusing on why they are supposed to be there.

Allyship is great, when it is done with good intentions, and a willingness to listen. You might hear some uncomfortable truths. You might have to humble yourself, but if you really care, that will be a small price to pay, to be able to do your part and help people in need. Black people are already fighting systemic racism, oppression from all sides, and a lifetime of scars from slurs, aggression and violence, we don’t need to be fighting with the people who say they stand with us, too, so if you can’t behave yourself, sit this one out, but if you really want to help, make sure you’re doing it for the right reasons, and not just for likes and attention.

The real question is, when people ask you to listen, will you hear what they are actually saying, or will you just hear that they weren’t grateful enough, for your instagram post?

Donate to The Bail Project

Check Back Soon For Further Announcements