Halloween is getting closer, and my favourite thing to do on the road to Halloween is to dim the lights and watch something frightening, in preparation for what should be the most frightening day of the year.

I have already watched quite a few movies, so will include some of the best, and some of the worst on Netflix, to give you my thoughts.

This post may contain spoilers for the following movies:

I wasn’t too sure I’d enjoy this when I saw it recommended to me. It had one and a half stars (which I was willing to overlook), and contained the word “Presence” in the description, which normally means “A bunch of vague shit will happen, with some foreboding music, nothing will be explained, until a cop out ending that was probably thought up at the last minute, and we will call it a night.” I gave it a chance though, because I was ill, and I thought that if it was boring, I’d at least have something to send me to sleep.

Luckily for me, or unluckily, considering I didn’t get the nap I so desperately needed, it was an enjoyable movie. The movie revolves around two girls who are left at their boarding school when their parents fail to pick them up for the holidays. That is a bit of a nightmare on it’s own, but when you combine it with a “Presence”, that actually is a presence instead of a bunch of jump scares and a score blatantly copied from Charlie Clouser, it makes for a movie in which you get invested. The characters seemed likeable, and well thought out, which sadly, can be rare in the horror genre, and there was enough suspense, and a few twists and turns, that you didn’t feel unsatisfied. It looked deeply into the ramifications of childhood isolation and abandonment, and did a great job at portraying the horror of those complex emotions, for both the victims, and the surrounding parties.

The majority of the main cast was young, but incredibly skilled. Horror can be a genre where young actors really shine, and this was definitely the case here. Emma Roberts also gave a good performance, that definitely casts doubt on some people’s view that she is a very one note performer, but then again, a lot of work Emma Roberts has done would do this, if people actually watched it, instead of just assuming she will be bad because they didn’t like Wild Child (which she wasn’t actually bad in, but that is another blog post entirely..). All in all, it was satisfying to watch. It was a horror movie with ambition, unwilling to rely on the easy tropes that can make a box office smash out of a genre that rarely gets the respect it deserves, February rose above and said “Fuck it, I’m not dumbing myself down.” and I applaud that, because it had the thought behind it to be the intelligent, thoughtful and chilling movie it wanted to be. 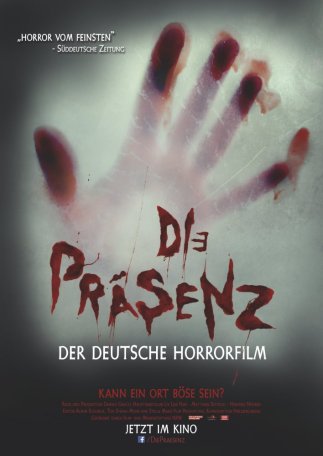 The sad part about this, is that it will add to the (untrue) belief that subtitled horror is boring, or bad. A lot of people miss out on some incredible horror movies, because the idea of watching something with subtitles puts them off, and I’m not trying to be a bitch, but films like this don’t help the cause.

Firstly, the word “Presence” being, well, present, meant exactly what I said it would earlier. Cheap tricks, a lack of substance, and a cop out ending. I should have known! However, I am very interested in world cinema, and I had literally never seen a German film before, so I gave this a chance. I’m assuming there is something better out there that I could have watched, if you know of any, let me know.

Anyway, the three main characters, two of which appear to be in a relationship drive up to an abandoned castle, with their creepy friend who doesn’t understand boundaries. They inexplicably (unless Netflix’s translators were having an off day) have a key to the castle, and are going there because they want to investigate it, and document paranormal nonsense. Standard. They spend most of the movie ignoring blatant evidence they are in danger, and doing stupid things, and there is every single jump scare you’d expect from this sort of thing (including the “I know we are in danger, and we are both really scared, but I want to have sex, right now, in this moment, despite the fact we are both aware there is probably a ghost just waiting to kill us, or something” moment). It felt very amateur, and as if the makers had watched Paranormal Activity and thought that night vision and jump scares were all that was required to make a found footage film that could stand up with some of the best offerings of the subgenre, such as Rec, Cannibal Holocaust (the problematic fave of found footage films), and The Blair Witch Project.

The story and characters were forgettable, and apart from it being in another language, nothing stood out, which is a shame. I think it suffered greatly from the over saturation of the found footage genre, specifically the “We came here to film some ghosts, and then the ghosts actually turned up, oh my GOD, what do we do now?” kind of found footage film. A lot of what they had to offer had already been done, and had been done a lot better elsewhere. 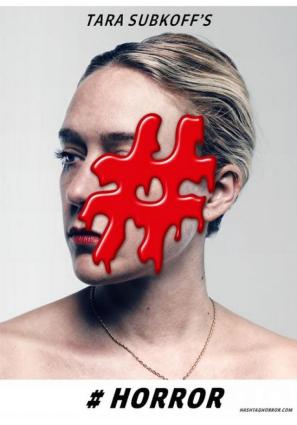 As mentioned, I tend to ignore star ratings on horror movies, because I feel it is a very misunderstood genre. That being said, #Horror deserves a one star rating. Firstly, for squandering a brilliant cast of actors. Secondly, for being unable to decide what it wanted to be. Thirdly, because “graphic design is my passion!”

I’m all for having ambition in your horror, I applaud it, but combined with ambition needs to be direction of some kind. The movie had no clue what it wanted to be. Was it a slasher, where I was supposed to hate the villain? Was it a cyberbullying PSA, in which I was supposed to hate everyone because they’re all as bad as each other? Was it a badly informed look at mental illness in children, where I was supposed to feel bad for the villain, but also for her dad who is apparently a doctor but doesn’t seem too bothered about getting their child the proper medical care she clearly needs? Who the fuck knows, and by the time I got through the movie, I didn’t care either. It kind of felt like the movie switched hands half way through and was written by somebody completely different, depending on which part you watch. The intentions for audience sympathy switched randomly throughout, and it was just messy.

If you want to make a movie with a message, good. Make a movie about how social media reduces empathy and makes people strive for the wrong things, or how cyberbullying is becoming an epidemic, or how money can’t buy happiness, or how mental health awareness in young people is needed, great, make that movie with a message, but pick one and run with it, don’t try and do them all at once. It reminds me of Eli Roth trying to make a similar point about “Everyone just wants to look good on social media.” with The Green Inferno, and it just got muddled, because the point wasn’t clear enough, and it was too mixed up with a million other messages, such as:

“Cutting down trees is bad.”
“Female genital mutilation is an issue we should talk about.”
“Bush did 9/11” (no, really, he threw that in there)
“I really liked the movie Cannibal Holocaust.”
“The government is evil.”
“Maybe people in Peru are evil too.”
“Maybe they aren’t evil.”
“Maybe WE are evil.”
“Capitalism has ruined the world.”
“SPIDERS WILL BITE YOUR DICK JUNI CORTEZ.”
“I really liked the movie White Slave.”
“What if charity is actually all about ego?”
“Phones are terrible, and we should stop giving them so much attention.”
“Phones can literally save your life.”

And so on, and so forth.

Eli Roth tried to shove too many thoughts, ideas and messages into one movie, and didn’t quite (that is a stretch) weave it all together so that it was coherent, and the same thing happened with #Horror. You shouldn’t have to explain the point of your movie in great detail, after the movie is done for us to understand the point you were trying to make. It should speak for itself.

This can be forgivable if it is at least frightening. If you have the name horror in your title, you better come at me with something horrific, but it just didn’t. The social media pop ups were a cool idea, but looked nothing like any social media network in the last decade or so, and was so odd looking that it took you out of every scene. The cast was great on paper, but the problem was, literally no character in the movie was likeable, apart from one, and she was only on screen for about two minutes at the beginning, so watching everyone get killed off was so emotionless. I wasn’t rooting for anyone. I didn’t want anybody to win. I should be on the edge of my seat, screaming to the good guys to get out and save themselves, but I just did not care at all, and that isn’t good, especially when the majority of your cast is kids. If you can’t make me care about kids being murdered, you’ve done a bad job. I just didn’t know who I should be rooting for, because the film couldn’t decide on that and inform me.

I really wanted to like this too, and as I said, the cast were great, and kids going on killing sprees for social media fame is a cool concept, but it just didn’t come together in a way that made the movie worth sitting through, and they didn’t explain that point until right at the very end of the credits, so it felt like they watched it, realised they hadn’t made a point that made much sense, and just tacked one onto the end, so that they could have their turn at convincing the world they had made an intellectual, thoughtful horror movie, when it wasn’t anywhere close.

RECENT BLOGS
Jen’s Spooky Soundtrack
British Fashion Start Up Awards Nominations
Your body, and the hopefully happy adventures you can have

9 thoughts on “The Road To Halloween continues…”

Event Name: The Week Behind Bars